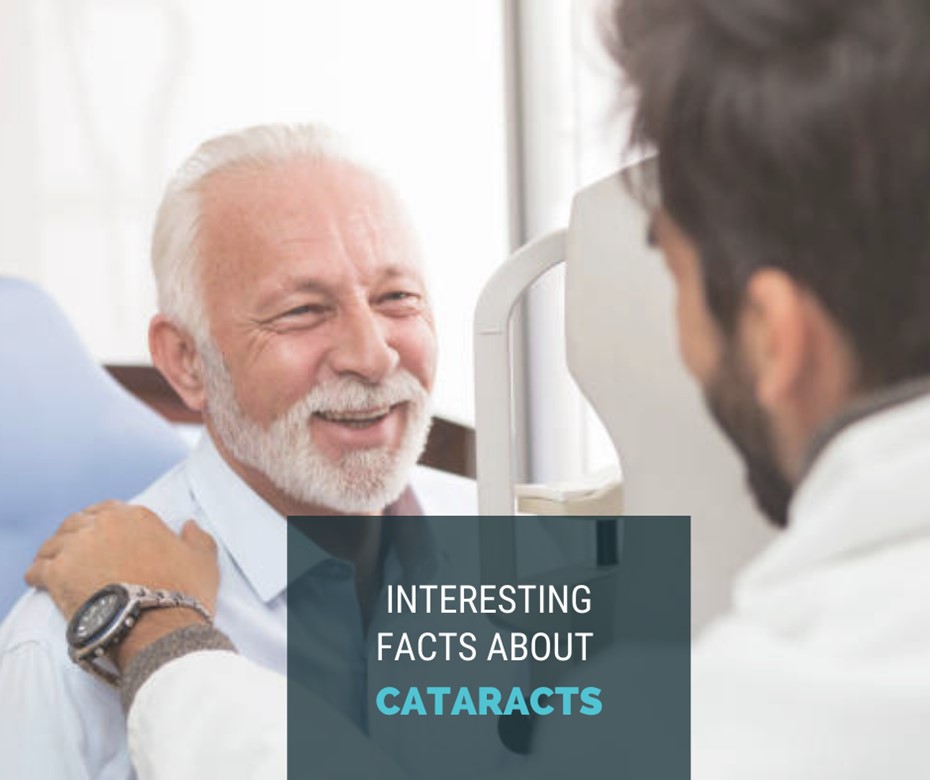 As we get older, certain eye diseases are more prevalent, such as cataracts. A cataract is an eye disease in which the eye’s clear lens becomes cloudy or opaque, causing a decrease in vision. More than half of Americans age 80 or older either have cataracts or have had surgery to get rid of cataracts.

At first, you may not notice that you have a cataract. However, cataracts can make your vision blurry, hazy, or less colorful over time. You may have trouble reading or doing other everyday activities.

The good news is that surgery can eliminate cataracts. Cataract surgery is safe and corrects vision problems caused by cataracts.

Listed below are interesting facts from the American Academy of Ophthalmology that you might not know about Cataracts:

There’s more than one type of cataract formation.

The most common type of cataracts (found in people over age 40) forms mainly in the center of your eye’s lens; this is called a nuclear cataract. Another type of cataract is called a cortical cataract. This wedge-shaped cataract develops at the edge of the lens instead of the center. A posterior capsular cataract generally forms at the back of the lens, blocking light rays from reaching the retina. Posterior capsular cataracts usually develop faster than nuclear and cortical cataracts.

Having diabetes increases your chances of developing cataracts faster and earlier in life.

The aqueous humor, clear fluid nourishes the eye’s lens in the front of the eye between the lens and the cornea. Aqueous humor provides oxygen and glucose (sugar) for cells. When someone with diabetes has uncontrolled diabetes has uncontrolled blood glucose levels, cells in the lens can become cloudy and less transparent. Eventually, a cataract form, making things appear blurry, faded, or tinged yellow.

Cataracts affected the work of the famous artist, Claude Monet.

Claude Monet (1840-1926) was a famous French painter. His painting style is known as Impressionism, which portrays the shifting effects of color and light over time. Monet was diagnosed with cataracts that grew progressively worse between 1912 to 1922. Having age-related cataracts meant that Monet could no longer see colors with the same intensity. The whites, greens, and blues of his earlier paintings were gradually replaced with larger brush strokes of more yellow, brown, and purple colors.

The color of your eyes affects your risk of developing cataracts.

Studies show that people with dark brown eyes have a higher risk of developing cataracts than people with lighter eyes. UV light is a known contributor to cataract development, no matter what color your eyes are. Everyone should protect their eyes from the sun with 100% UV-blocking sunglasses and a wide-brim hat.

Give us a call TODAY to learn more about cataracts or schedule an appointment!